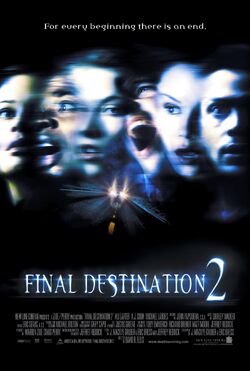 Despite a lukewarm initial critical reception, it has since gained recognition as one of more critically acclaimed films of the franchise. The tagline was "You can't cheat Death twice".

One year after the explosion of Flight 180, A.J. Cook is going on a vacation to Daytona Beach for spring break with her three friends, Sarah Carter, Dano and Frankie. While waiting on the entrance ramp to Route 23, she has a horrifying vision of a deadly pile-up, caused by a truck carrying logs. She stalls her car to block the road and prevents 7 of the intended victims from entering on the highway. Officer Michael Landes comes and asks Kimberly to get out of the car due to her erratic behavior. As the people being blocked get out of their cars to complain, the pile-up occurs. An 18-wheeler truck drives into Kimberly's SUV killing her friends, but Thomas manages to save Kimberly from being killed when he pulls her out of the way at the last second.

Back at the police station when Officer Burke is talking to the survivors, Kimberly mentions the curse of Flight 180, which T.C. Carson tells the group about. The other survivors of the pile up don't believe it and they all leave. Later that day, lottery winner and pile up survivor David Paetkau dies after being impaled by the fire escape ladder on his building after an attempt to escape from an apartment fire. Kimberly seeks help from the only surviving member of Flight 180, Ali Larter.

Clear refuses to help Kimberly, saying that if Kimberly was smart she would forget about the others and save herself. Before Kimberly leaves, Clear tells her that noticing death's signs can mean the difference between life and death. Kimberly then realizes that the next to die is James Kirk, and pigeons will cause his death. They arrive at the scene, but are too late when Tim chases some pigeons, which causes a construction worker to drop a glass panel on Tim, crushing him. Once this happens, Kimberly and Thomas call a meeting with the rest of the survivors.

Clear eventually decides to help Kimberly and meets her shortly after Tim's death. They go off to see Tony Todd who informs them that "only new life can defeat death", giving them a quest to find Justina Machado, a survivor of the pile-up who is pregnant. Kimberly, Clear and Thomas then go to Thomas's apartment for the survivors meeting. The grieving Lynda Boyd leaves the meeting before it is over. Eugene Dix leaves shortly after, saying he doesn't believe any of their stories about cheating death.

Once they have left Jonathan Cherry sees a shadow that looks like a man with hooks. As Nora enters the elevator to prepare for her son's funeral, she gets her hair caught in hooks carried by a man standing behind her, but when she attempts to leave the elevator, she gets her head caught in the malfunctioning doors. Eugene, Keegan Connor Tracy, Clear, and the man try to save her, but she is decapitated. This causes Eugene and Kat to believe Clear's stories.

On the way to the hospital to find Isabella as she has gone into labor, Clear mentions how death is working backwards, Eugene, Kat, Rory, Thomas and Kimberly all mention how they have already avoided death once, and Clear realizes that death is trying to "seal the rift", as they should have been dead already if it wasn't for the late deaths of the Flight 180 survivors. There is suddenly a van coming up quick, Kat

swerves and so does the van (which has Isabella in it), Kat's car swerves off the road a log impales the car trapping Kat, the car spins backward and a large sharp pipe narrowly misses Kat's head.

Eugene has his lung punctured, and is rushed to the hospital.

It's at this point where Rory saves Noel Fisher from being hit by a news van traveling at high speed. When the news van stops it puts a hole in its petrol tank, causing the petrol to run down a pipe past Kat's car. Fire men work on getting Kat out of the car, but when a fireman attempts to remove the log with the jaws of life, the airbag is deployed, forcing Kat's head into the large sharp pipe, instantly impaling her.

The cigarette Kat was holding drops out of her dead hand and it blows into the pipe where the petrol spilled, igniting the petrol and causing the news van to explode. The explosion sends a barbed wire that was attached to a nearby fence to Rory, slicing him into three parts and severing his left arm. Thomas, Kimberly and Clear all go to the hospital, where Isabella's baby is born. They think they have defeated death, but Kimberly has another vision, and then realizes Isabella was never supposed to die in the pile-up.

Clear then runs to find Eugene, and finds him in a hospital room. She opens the door, which pulls the plug out of an outlet, causing a spark, and an explosion, which expands through the hallway. Kimberly turns around to see the dead corpses of Clear and Eugene. Working off an earlier vision, Kimberly believes that she is the "New Life", gets in a van and drives it into a lake.

She drowns in the lake but is resuscitated by Doctor Ellen Kalarjian, thus making her cheat death and skipping Burke as she is the last in line. Making her and Thomas the only survivors of death's design. Sometime later, they are invited to the Gibbons' house for dinner, and they talk about how they are finally returning back to normal life. This is when Mr. Gibbons mentions how Brian was saved by Rory. Kimberly, and Burke look at each other, before the BBQ grill with Brian in front of it explodes and his arm lands on Ms. Gibbons plate as she screams in horror.

The original movie was supposed to end with Kimberly and Officer Burke embracing in the hospital after Kimberly was revived, without Brian Gibbons dying.

There are 2 different posters, one featured the cast's face, and the other one is a cast poster.

The first poster featured 6 characters, from left to right: Kimberly, Eugene, Clear, Nora, Kat and Thomas. At the middle of the poster, right under Clear and Nora, there is a car with it's light flashing on a road. The car and its shadow makes it looks like a skull with its eyes flashing. There also a tagline at the top of the poster: "For every beginning there is an end". The movie's name "Final Destination 2" is under the cast, with all capital letters. This poster is mainly in black, except the cast's face are over white.

The second poster is a cast poster, which also featured 6 characters, from left to right: Eugene, Kimberly, Clear, Thomas, Rory and Kat. Nora from the first poster didn't appear in this poster, and Rory replaced her. There is a skull face at the top of the background, and there are lighting too. Several buildings are seen next to Eugene and Kat, and the cast are seen standing on a road. The movie's name "Final Destination 2" is at the middle of the poster, with all capital letters. There also a tagline under the movie name: "You can't cheat death twice." This poster is mainly in dark blue and black, but the cast are in their normal color.

The film received mixed reviews from critics. Review aggregate website Rotten Tomatoes reports 47% of critics gave the film positive write-ups based on 107 reviews, with an average rating of 5 out of 10. It's consensus is, "This sequel is a little more than an excuse to stage elaborate, gory scenes of characters getting killed off." While most praised it for its special effects and inventive death sequences, some dismissed it as being 'an average sequel to an average movie'. Nevertheless, this film has received the second highest score amongst the five films in the franchise on Rotten Tomatoes, the first being Final Destination 5 with a score of 61%. In Metacritic website the movie scored an unfavorable 38 based on 25 reviews and the third highest rating of Final Destination series. The First is Final Destination 5 with 50% and Final Destination 3 with 41%.

The film has landed on many "best car crash/accidents" lists including one by New York Magazine which cited the highway pile-up scene as the greatest car crash in movie history, calling it "the new gold standard for car-related chaos in cinema". Even acclaimed director Quentin Tarantino was quoted as saying that the opening scene was "a magnificent car action piece". The highway pile up was nominated for "Best Action Sequence" at the 2003 MTV Movie Awards.