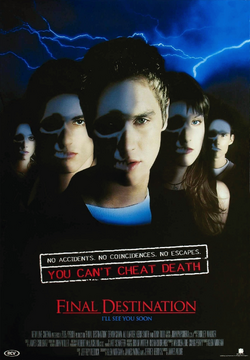 High school student Alex Browning is going on a field trip to Paris with his friends and classmates. He is feeling nervous before the flight, sensing that something bad is going to happen. Nonetheless, he gets on the Boeing 747, but as it takes off, there is a lot of turbulence and the engines fail, rupturing the fuel tanks and causing a catastrophic explosion, resulting in the deaths of everyone on board, including himself. This turns out to be a premonition. However, when the events of the vision begin to repeat themselves, he panics and causes a fight, resulting in him and six others being removed from the plane. As the plane takes off, it explodes just as Alex predicted, leaving the survivors stunned. Afterwards, FBI agents Weine and Schreck interview the people who were removed from the plane and become suspicious of Alex.

A month later, Alex's best friend Tod Waggner is strangled in his bathtub but his death is deemed a suicide. When Alex and fellow survivor Clear Rivers visit his body at a funeral home, they encounter mysterious mortician William Bludworth, who tells them that they have ruined Death's design, and Death is killing the survivors who were meant to have died on that plane. The next day, Alex and Clear discuss what the mortician said at a cafe. Alex believes that if they look out for omens they can cheat Death again, although Clear is skeptical. When they encounter the rest of the survivors Terry Chaney is suddenly hit by a speeding bus. That night, after watching a news report on cause of the explosion Alex deduces that the survivors are dying in the order they would have died on the plane.

He realizes that his teacher Valerie Lewton is next on death's list, and he rushes to save her. Thinking Alex is up to no good, Ms. Lewton calls the FBI agents who take Alex to the police station for questioning. They eventually release him, but he arrives too late to save Ms. Lewton who is killed when a chain reaction causes a kitchen knife to impale her in the chest before her house explodes.

Alex reunites with the rest of the survivors Clear, Carter Horton and Billy Hitchcock to discuss what they are going to do. When Carter learns that he is next in Death's list he stalls his car on train tracks in an attempt to kill himself. He changes his mind at the last second, but his seat-belt gets stuck. Alex is forced to take action, and saves Carter at the last second.

The train smashes the car, and Billy is partially decapitated by flying shrapnel from the wreckage. Alex realizes that since he intervened Death skipped Carter and moved on to Billy. Alex goes into hiding from the police inside an isolated cabin. Alex, thinking he was next after Billy, recalls in his original premonition that he had switch seats with Christa Marsh and Blake Dreyer earlier on the plane, meaning that Clear is actually next before him. He rushes to save her while being chased by agents. Meanwhile after experiencing short-circuits in her house, Clear notices Death's presence and tries to escape in her car but she is trapped by loose live wires that deactivate the car, preventing her from escaping.

Alex arrives in time and tries to lash the wire off but it knocks an acetylene tank which is launched under the car and ignites the leak from the gasoline tank, spreading the fire around the car. With no other choice, Alex sacrifices himself by grabbing the wire, electrocuting him as Clear escapes from her car seconds before it explodes. Weine and Schreck arrive at the scene as they, along with Clear, attempt to resuscitate an incapacitated Alex.

Six months later, Alex, after he has recovered, arrives in Paris along with Clear and Carter to celebrate their survival. While discussing their experience Alex explains that Death never skipped him. Suddenly a freak incident involving a bus causes a giant neon sign to swing off its hinges down towards Alex. Carter manages to push Alex out of the way at the last second. Alex says that Death skipped him, and when Carter asks Alex who is next on Death's list, the neon sign swings back down towards Carter. The screen then fades to black and a loud smashing sound is heard, ending the film by implying that Death's plan is still in action.

In the alternate ending, Alex and Clear have sex on the beach, resulting in Clear's pregnancy. Later, when Alex rescues Clear, the wire electrocutes him and burns him to death.

Nine months later, Clear gives birth to a baby boy named Alex, named after his deceased father, saving her and Carter from Death. At the end, Clear carries Alex Jr. and reunites with Carter at the Flight 180 memorial. Clear states that they only won the chance of a "full life". A gust of wind, blows a leaf off a tree and the leaf covers the camera and then the credits roll.

Both posters feature five characters. The first poster features the characters (from left to right) Terry Chaney, Carter Horton, Alex Browning, Clear Rivers, and Billy Hitchcock. The cast has half of their face as a skull. The background of the poster is lightning.

The second poster features the same cast without the half skull faces. The lightning looks like a skull which represents Death. The tagline is not on the poster.

A third poster that was not a theatrical release poster is the same as the second poster, but Billy is replaced by Tod.

The film received mixed reviews from critics. Review aggregator website Rotten Tomatoes reports 33% of critics gave the film positive write-ups based on 93 reviews, with an average rating of 4.6/10, and a generally negative 32% approval rating from "top" critics based on 22 reviews.

The site's consensus of opinion is that "Despite a panel of X-Files' alums at the helm and a promising premise, flighty performances and poor execution keep Final Destination from ever taking off." At Metacritic, which assigns a normalized rating out of 100 to reviews from mainstream critics, the film holds a mixed/average score of 36 based on 28 reviews, while IGN gives the film 2.5 stars out of 5.

The film premiered in 2,587 theaters across the United States and Canada on March 17, 2000, earning $10,015,822 on its opening weekend with an average of $3,871 per theater. Final Destination placed at #3 in the US box office on its opening weekend, behind biography film Erin Brockovich and the science fiction film Mission to Mars. The film remained at #3 on the next weekend before dropping to #7 on its third weekend.

The film continuously dropped on the next weekends until it was removed from the top-ten list on its eight weekend. The film lasted in theaters for 22 weekends, its last screening airing in 105 theaters and grossing $52,675, placing in #56. Final Destination grossed $53,331,147 in the United States and Canada on its total screening and earned $59,549,147 in other territories, having an overall gross of $112,880,294 internationally.

Retrieved from "https://finaldestination.fandom.com/wiki/Final_Destination?oldid=96388"
Community content is available under CC-BY-SA unless otherwise noted.