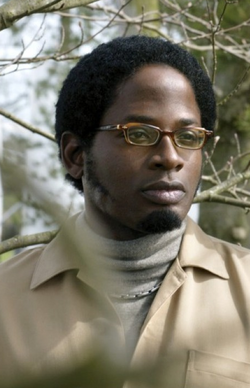 Eugene Dix is a main character in Final Destination 2 and is a survivor of the Route 23 highway pileup. He is a high school teacher who was set to replace another teacher at Mt. Abraham High School.

Eugene is the sixth and final survivor of the Route 23 pileup to die.

Eugene lived somewhere in New York. He is shown to be very sensitive, skeptical, and sarcastic. He is also shown to have suicidal tendencies. Prior to the crash, Eugene was substituting for Ms. Valerie Lewton at Mt. Abraham High School when he learned that one of his students at his original school brought a knife to class and killed his substitute teacher.

Eugene was riding his motorcycle to work, when Kimberly had a premonition of a pile up on Route 23. She blocks the road to prevent the other drivers from entering the highway, including Eugene. Moments later the accident occurs just as she predicted, killing several other people.

After the accident, the other survivors are brought to the police station, where Eugene tells them about the curse of Flight 180, even though he himself is skeptical. He does some insensitive jokes with Rory to Tim and Nora. After Evan Lewis's death the remaining survivors reunite for safety, and Eugene expresses his disbelief that Death is still after them. He leaves the apartment and goes into an elevator along with Nora.

While in the elevator, he witnessed Nora's death and becomes suicidal. He takes Officer Burke's gun and tries to shoot himself, but none of the shots go off, as it is not his turn to die. Now that Eugene believes that Death is still after them he teams up with the survivors to try to find a way to cheat Death's plan.

After the group leaves the apartment to find Isabella Hudson their vehicle suffers a blowout and they swerve onto a nearby farm. The back of the car is penetrated by PVC pipes, which puncture Eugene's lung and is sent to the hospital.

While in the hospital bed, Eugene watches helplessly as Death closes the vents in his room and snaps the tube to the oxygen tanks, spreading it into the air. His bed began to roll away from the wall and the plug supporting his defibrillator began to come out of its socket, unplugging his defibrillator.

As Eugene gasps for air, the defibrillator goes into

emergency mode, and Eugene is able to breathe again. Everything seems fine, until Clear Rivers shows up and opens his door. With the oxygen sifting in the room and the vents shut, the plug comes all the way undone and creates a spark. The oxygen is ignited and creates an explosion, incinerating both Eugene and Clear as well.