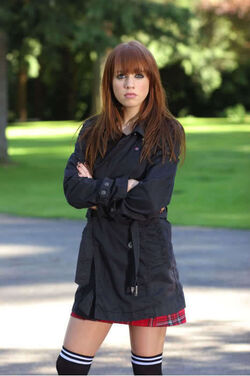 Erin Ulmer is a main character and a survivor of the Devil's Flight roller coaster derailment in Final Destination 3. She was a school Goth and the girlfriend of Ian McKinley.

Erin was the fifth survivor of Devil's Flight to die.

Erin lived in McKinley, Pennsylvania, and attended McKinley High School. Like Ian, she is shown to be very intelligent and very sarcastic. They also worked together at the Build It hardware store. Erin is of German descent.

She and Ian visited the carnival for their senior class field trip, and decide to ride the Devil's Flight roller coaster. Before the ride starts fellow classmate Wendy Christensen has a premonition that the ride will crash, killing everyone on board. When she panics a fight breaks out between Kevin Fischer and Lewis Romero. When Lewis accidentally slaps Erin across the face Ian gets involved as well, and they are all thrown off the ride. Erin follows Ian out, shortly before the roller coaster crashes as Wendy predicted, killing the remaining passengers on board. Weeks later, she and Ian are at their school signing yearbooks when they see a somber Wendy walking alone in the rain.

Ian and Erin laugh a little when they see Ashley and Ashlyn try to invite Wendy to the tanning salon. She and Ian later attend their funeral after they are incinerated in the tanning beds. Erin tries to calm Ian down when he causes a scene, and follows him back to his car when Kevin and Lewis walk him out. After Frankie and Lewis's death, Wendy and Kevin visit Ian and Erin at the hardware store to warn them that Death is still after them, and they are next on Death's list, but Ian and Erin are extremely skeptical and continue to mock them.

As they talk, Ian accidentally causes a box to fall off a shelf and onto a forklift's gear shift. Unbeknownst to them, the forklift slowly begins to follow them throughout the store, and impales a large shelf. A hammer falls off the shelf and hits the controls, causing the forklift to raise the shelf. It slowly begins to rise into the air, and presses against a set of ladders. After much force the ladders finally snap, knocking down several planks of wood.

Wendy pushes Ian out of the way at the last second. Soon after, all of the other items on the shelf begin to fall as well, and a wooden board lands on top of the end of a plank and it is sent flying through the air and punctures a bag of sawdust, which sprays Erin in the eyes. She stumbles back against a nail gun that Ian had left on a set of boxes, and it activates, rapidly discharging several nails into her head and hand. She dies from massive internal brain hemorrhaging and bleeding, gasping her last breath. Her death infuriates Ian, believing Wendy was responsible for Erin's death.