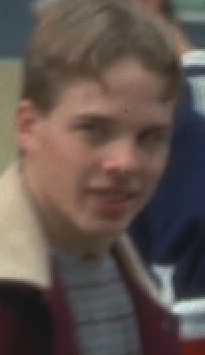 Dustin was a Mount Abraham High School student, and a casualty of the Flight 180 explosion.

Dustin was present when Carter Horton bullied Billy Hitchcock outside the airport, right after they got off from the bus. Later inside the airport, Dustin was seen followed the group, and listening to Larry Murnau's french. Before boarding Flight 180, Dustin approached when Carter bullied Billy again. Dustin smiled at Carter, and Carter patted him as a replied, then both of them walked away. It can be assured that they were friends. Dustin sat on the left side of the plane, in the same row with Ms. Lewton. During the explosion, Dustin's face had burned into black, and some of his hair even burned away. But he didn't died yet, until the window side was destroyed, and he was the first one to fall out the cabin, following by the two students who sat next to him.

Dustin was still alive, and he heard Alex shouting about his premonition. Dustin didn't get off the plane, and he remained on it when it took off. It can be assured that Dustin died as the same way as what happened in Alex's premonition, and that he fell out from the cabin.

Retrieved from "https://finaldestination.fandom.com/wiki/Dustin?oldid=87084"
Community content is available under CC-BY-SA unless otherwise noted.