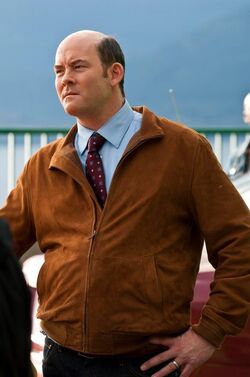 Dennis Lapman is a main character in Final Destination 5 and is a survivor of the North Bay Bridge collapse.

Dennis was the fourth survivor of the bridge collapse to die.

Dennis lived in New York, and is the boss of the local sales division at Presage Paper's local office, although he doesn't seem to care much for his employees.

Dennis is on his way to a corporate retreat with his employees, when Sam Lawton has a premonition that the bridge they're crossing will collapse, killing everyone on it. When Sam panics, Dennis leaves the bus to go check on him and sees the bridge collapse moments later, just as Sam predicted.

After the accident, Dennis delivers a farewell speech at the memorial service for the victims.

Agent Jim Block keeps in contact with Dennis to monitor any strange behavior from his employees. Peter later tries to warn Dennis that Death is still after them, but Dennis doesn't take this seriously. Dennis informs Block about the behavior of Peter which causes Block to watch him later.

When Nathan kills Roy Carson in a warehouse accident, Peter, Sam, and Molly arrive to see what happened. After Peter suggests that Nathan must have taken Roy's lifespan, Sam tries to figure out who is next on Death's list. Just as Dennis arrives to question Nathan about the incident, the vibrations from a machine cause a wrench to fall into a rapidly spinning belt sander, and it is hurled at Dennis's face, killing him instantly.