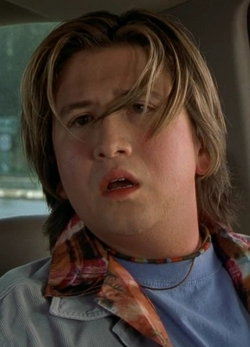 Daniel "Dano" Estevez was a character in the film Final Destination 2. He was one of Kimberly's friends and was one of the survivors in the pile-up on Route 23.

Dano was sitting in the back seat of Kim's SUV while they traveled to Daytona Beach and he began to smoke along with his friend Frankie. While doing so, a truck carrying a large load of logs spilled its contents all over the road, which began an auto pile-up. Kimberly was unable to avoid one of the logs and her SUV flipped out of control, critically injuring her and her friends. Suddenly, a large semi comes out of nowhere and drives toward the vehicle, supposedly smashing into them.

However, this is all a dream and she hasn't even moved her SUV yet.

After witnessing the crash, Kim begins to freak out once she sees all the signs she saw in her dream. Dano doesn't take her seriously, and suggests he drives, but Kim tries to tell her side of the story. He and his friends urge her to move forward, but after driving a few feet, she stopped her SUV in the middle of the road, holding up traffic. When the crash occurs just like she predicted, Dano and the others begin to freak out. After staring at the carnage, they hear a loud horn blaring and see a large truck (the same one from Kimberly's dream) heading towards them. The truck slams into the SUV and incinerates it, instantly killing Dano, Frankie and Shaina.

Retrieved from "https://finaldestination.fandom.com/wiki/Dano_Estevez?oldid=94645"
Community content is available under CC-BY-SA unless otherwise noted.