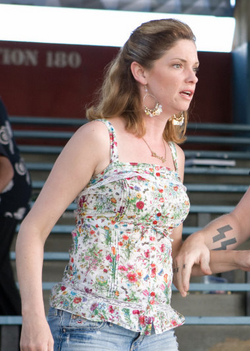 Cynthia Daniels was one of the casualties at the McKinley Speedway in The Final Destination.

Cynthia is the Irish accent, she was born in Indiana, but was resided in McKinley, Pennsylvania. She was married to a racist named Carter Daniels. She and her husband attend the McKinley Speedway to watch a race.

In a horrible vision seen by Nick O'Bannon, Cynthia and her husband are cut in half by a flying, flaming car hood after a race car explodes and sends a large sheet of metal in their direction.

When Nick freaks out after the dream, he spills Carter's beverage all over his clothes and Carter runs out the stadium to go tell him off, shouting at Cynthia to stay put. Suddenly, the crash happens just like Nick predicted. Carter tried to run back inside to save Cynthia, but he was stopped by a security guard.

It can be assumed that Cynthia was severed in half just like in Nick's vision.