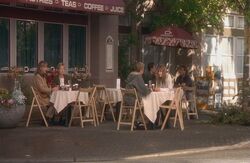 Coffee Beanery is a coffee shop where Alex Browning and Clear Rivers had coffee when Terry Chaney being hit by a bus.

After visiting William Bludworth, Alex Browning and Clear Rivers went to Coffee Beanery and had coffee on the next day. At the same time, Valerie Lewton was at the coffee shop and buying coffee. Not long after, Carter Horton and Terry Chaney, along with Billy Hitchcock were also there. When Carter and Alex were arguing, Terry was hit by a bus, which was driven by Jack Curtis and Kat Jennings was on it.

Retrieved from "https://finaldestination.fandom.com/wiki/Coffee_Beanery?oldid=65628"
Community content is available under CC-BY-SA unless otherwise noted.