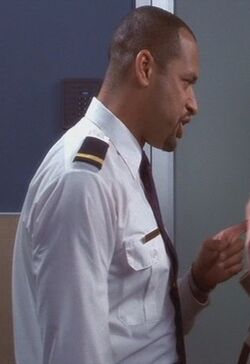 Co-pilot was the co-pilot and one of the casualties of Flight 180.

After Alex has a premonition that Flight 180 will explode, he and Carter start fighting and they get kicked off the plane along with Terry, Ms. Lewton, Tod, Clear, Larry, and Billy. The co-pilot tells Ms. Lewton that only one teacher (Larry) may be allowed to get back on the plane.

The co-pilot gets back on the plane and it explodes, killing him and others.

It is possible that he might be Mr. Smith, the husband of visionary Pam Smith who foresaw his death on Flight 180.