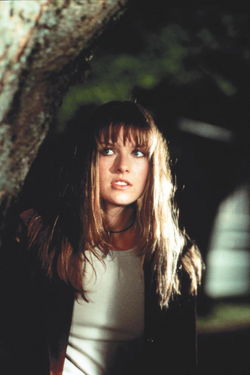 Clear Marie Rivers is a main character in the Final Destinstion series, serving as the deuteragonist of Final Destination and the tritagonist of Final Destination 2. She was a senior student of Mt. Abraham High School and was one of the students aboard Volée Airlines Flight 180, who after surviving a plane explosion foreseen by Alex Browning, assists him in "cheating Death" by rescuing the other survivors from their impending doom. In the sequel, she aids Route 23 visionary Kimberly Corman in saving the new set of victims. Aside from William Bludworth, Clear is the only character to have a significant role in more than one film in the series.

Clear was the seventh and final survivor of Flight 180 to die.

Clear Rivers was born on September 5, 1982 to a couple from Mt. Abraham, New York. Her biological mother died during childbirth, and her father married another woman. Clear was very close to her father and they would often stay at a cabin in the woods, and go fishing. However, one day Clear's father was murdered at a 7-Eleven store, and Clear's stepmother took another husband.

Clear's new parents often neglected her, so she decided to move out and live on her own. Unaware of her troubled past, the other students at Mt. Abraham High School found her mysterious and sly. Clear was one of the students qualified to board Volée Airlines Flight 180 for the school's annual field trip to Paris, France. She is of English descent.

When Alex warned the other passengers about his vision of the airliner exploding in mid-air, Clear left the plane on her own accord before it detonated killing the other 287 passengers. When FBI agents Weine and Schreck interrogate her, she claimed that she believed Alex claims that the plane would explode. When the surviving students' parents arrive, she was given a ride home by Alex and his father. At the memorial for the victims, Clear presents Alex with a white rose to show her gratitude for her safety. After Tod Waggner's death, Clear showed up at his house and advises Alex to flee rather than face Weine, Schreck and Tod's parents who hold Alex responsible for his death. The next day when Alex visits Clear, she revealed that she believed Alex because she felt what he felt. When Clear and Alex sneak into the mortuary to observe Tod's body, the mortician, William Bludworth, tells them that Death is claiming the lives of those who were meant to die on the plane.

The next day while she and Alex discuss what the mortician said at a cafe, they encounter the rest of the survivors and witness Terry Chaney get ran over by a bus. Now convinced that Death is still after them, she helps Alex to rescue the remaining survivors, yet they only manage to save Carter Horton.

During a thunderstorm the next night, high winds blow loose live wire cables around Clear's house. She notices Death's presence and after Clear releases her dog Rex, a loose rotary clothesline that nearly impaled her earlier is blown into a portable pool of water that spills water around her, but Clear is able to jump onto the trellis before the cable conducts the water. She climbs onto the house and enters through the window as the wire hits the house's main breaker, short circuiting all her home appliances in her house and forcing Clear to run thorough the garage to escape in her car.

As the wire breaks through the garage door, Clear drives off and the rails of the garage door hits the car's windshields. She manage to drive though but the wire lands on top of the car, shutting off the car's battery and preventing her from escaping. The wire hits a spike that punctures a gasoline tank, that leaks under her car. When Alex arrived at the house, he tried to knock the wire off the car with a shovel but it flew out of his hand into a tank of acetylene that propels under the car and ignites the gasoline leak, spreading the fire around the car. With no other options, Alex grabs the wire, despite Clear's pleas for him to stop, allowing Clear to escape from the car seconds before it explodes.

Six months later, Clear travels to Paris along with a recovered Alex and Carter to celebrate their survival. However, as Alex rethinks about their triumph over Death, she notices a reflection of a bus behind her, an omen from Terry's death earlier. Clear warns Alex, saving him from a speeding bus, yet also witnesses Carter's demise revealing that Death's plan is still in action.

In the space between the first film and this film, Alex had been killed by a loose brick, and Clear is revealed to be the only Flight 180 survivor left. She had locked herself inside the Stonybrook Mental Institution to protect herself from Death, until a car pileup happened and survivor Kimberly Corman asks for Clear's help in cheating death. Distraught by Alex's death, Clear advises Kimberly to isolate herself and let the others perish, not wanting to risk her life for a stranger, but she soon realises after the first death of a survivor of Route 23 that she has no choice and that more innocent people will die if she stayed locked up.

After Tim Carpenter's demise, Clear leaves the asylum and decides to help Kimberly. She revisited Bludworth, along with Kimberly and Officer Thomas Burke, who tells them that the only sure-fire way to cheat Death is via new life. This lead them to believe that if Isabella Hudson has her baby, it could break the chain and give all of them a clean slate.

While Isabella was taken into custody, The survivors gathered in Thomas' apartment. Clear tried to explain to them how to evade Death, although none of the other survivors believe her, and they all leave, with the exception of Rory. After witnessing Nora's death, the survivors are convinced, and she and the other survivors rush to the hospital after learning that Isabella has gone into labour.

As the group races to reach Isabella, they discover that they were all spared from Death once before because of the events set into motion by the survivors of Flight 180. The vehicle suffers a blowout, causing it to crash, and Eugene Dix is taken to the hospital for a severe injury.

After Kat Jennings' and Rory Peter's are killed, Clear, Kimberly, and Thomas rush to the hospital. Clear goes to find Eugene, while Kimberly and Thomas find Isabella. They find that she and her baby are alive, however after Kimberly recalls her vision, it is revealed that Isabella was never meant to die in crash.

Meanwhile in Eugene's room, the air vents close and two oxygen tanks start leaking. Something falls over and knocks into one of Eugene's life support machines, pulling its plug nearly out of the socket. The socket sparks because of the oxygen but doesn't ignite yet. Clear rushes to Eugene's room and opens the door which knocks the plug completely out of the socket, which then creates a spark and ignites the oxygen around Clear and Eugene, incinerating them both and ending the Flight 180 list.

At the end of the movie before Flight 180 explodes, Clear gets off the plane along with Alex, Tod, Carter, Terry, Billy, and Ms. Lewton.

Retrieved from "https://finaldestination.fandom.com/wiki/Clear_Rivers?oldid=94566"
Community content is available under CC-BY-SA unless otherwise noted.