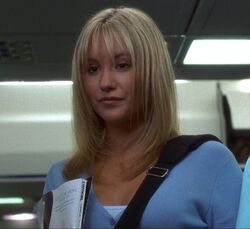 Christa Marsh is a character in the film Final Destination. She is a high school student and one of the casualties aboard the doomed Flight 180.

Christa and Blake Dreyer were almost always seen together and Tod Waggner had a major crush on the two. Both of them got on the plane and politely asked Alex Browning to change seats so they could sit together. After he moved, the plane began to malfunction and exploded, killing Christa. Christa and Blake are best friends and pretty girls.

After Christa and Blake board Flight 180 to Paris with the rest of their French class, Blake asks Tod if he can trade seats with Christa so they can sit together. Tod tells them both he has a bladder infection so he can sit with Blake. The girls go to ask Alex instead, who is currently having his premonition.

Alex turns toward Christa and Blake after they get his attention. Christa asks if Alex can trade seats with Blake, and explains what Tod told them. Alex agrees to move next to Tod, so Christa and Blake end up sitting in row 25.

A few minutes after taking off, the plane starts to shake violently a couple times as the lights flicker. Christa and Blake start to panic and scream as well as a few other passengers. Soon, everyone on board start to yell and scream. Christa and Blake start to get extremely terrified. Soon, fire erupts out of Engine #1, and the plane starts to fall to the ground.

A few minutes pass, and then the front of the plane explodes. A wall of fire roars into the cabin, incinerating Christa, Blake and all of the passengers, killing everyone.

However, all of this only happens in Alex's premonition.

When Christa and Blake try to get Alex's attention, he is apparently asleep and suddenly wakes up with a start, gasping for breath. Christa asks Alex if he can trade seats with Blake so that they can both sit together, and then explains the lie that Tod told them, just like in Alex's dream. Alex is startled and begins to run to his other seat, scaring Christa and Blake and leaving them speechless. They decide to sit down as Alex starts to rant that the plane is going to explode. A crew member arrives and tells Alex to leave. Seconds later, a fight breaks out between Carter and Alex, who Christa sees getting removed from the plane. Eventually, the crew member has had enough and removes the others in the aisle: Terry Chaney, Valerie Lewton, Larry Murnau, and Billy Hitchcock. Tod and Clear Rivers get off the plane on their own, leaving Christa and Blake. Minutes later, Mr. Murnau returns, and the plane departs.

The plane loses control and explodes the way it was supposed to, and Christa and Blake are burned alive with all the other passengers.