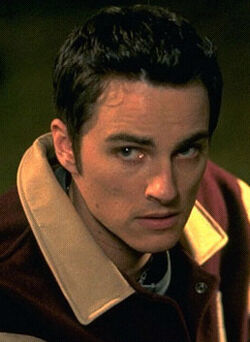 Carter Horton is a main character in Final Destination and is a survivor of the Volée Airlines Flight 180 plane crash. He was a senior jock at Mt. Abraham High School and the rival of Alex Browning. Carter was among the students who board the plane.

Carter was the fifth survivor of Flight 180 to die.

Carter was born on March 11th, 1982, in Mt. Abraham, New York. He is very arrogant and hot-tempered, and often fights with Alex which he bullied whenever they're together. He is also dating Terry Chaney, and the two go on the school's annual field trip to Paris together.

Carter boarded Flight 180, with his girlfriend Terry. When Alex attempts to warn the other passengers about the plane exploding, Carter believes he is making the whole thing up as a joke, and tries to fight him. As a result, both of them are removed from the plane, along with Terry and five others. After the plane departs, Carter began to criticise and mock Alex, who fights with him at the terminal. While the guards manage to separate them, the plane explodes shortly after, as Alex predicted.

In the aftermath, Carter continued to show hostility towards Alex refusing to admit that he saved him. At the memorial service, he tells Alex that he doesn't owe him anything and that he is in charge of his own life. Later, Carter is driving with Terry when he sees Alex and Clear talking at a cafe. When he confronts Alex, Terry storms on in frustration and is suddenly killed by a speeding bus, leaving Carter devastated.

When the survivors reunite, Alex explains that Death is claiming the lives of those who were meant to die on the plane. After learning that he is next on Death's list, Carter, frustrated over having no control over his life, begins to drive recklessly through the street despite the others trying to stop him. He finally stalls his car on a railroad track, wanting to die on his own terms. Carter changes his mind at the last minute but finds himself trapped inside the car when the doors are locked and his seat belt jams. However, Alex manages to save him at the last second, just before his car is smashed by an oncoming train, and Death skips him.

Six months later, Carter, Alex and Clear travel to Paris to celebrate their survival. While relaxing outside a French restaurant, Alex starts to see more omens foreshadowing his death and Carter playfully taunted Alex, claiming that he is next. After Alex leaves the table he is almost hit by a bus, but it swerves and crashes into a pole, that flies into the air and knocks a sign of its hinges. The sign comes swinging down towards Alex, but Carter shoves Alex out of the way at the last second, claiming that he was right to which Alex responds that Death just skipped him.

When Carter questions who is next, the sign swings back down towards Carter, crushing him and revealing that if Death skips someone it will eventually come back for them.

In the alternative ending, Carter can be seen in front of the Flight 180 memorial, crying. After seeing Clear and the son she just gave birth to——Alex, named after his deceased father, Carter wipes his tears and says that Alex will never have chance to see him, but Clear responds that “he sees him, every day.” Later Carter says that Alex was right about the design, and claims that they beat death, but Clear responds that they only won a chance at a full life, before a leaf lands on the camera ending the movie.

Carter was briefly mentioned in Final Destination 2, by Rory Peters, a survivor of the Route 23 disaster. Rory reveals that he was supposed to go inside a theatre that collapsed on the guests, but decided not to go after witnessing Carter's death.

Though Carter is not mentioned in The Final Destination, the character Carter Daniels is named as an allusion to him. Additionally, a car resembling Horton's is briefly seen.

Carter is seen being thrown off of Flight 180 at the end of Final Destination 5. The group of arguing classmates pass by the seats of Sam Lawton and Molly Harper, before the plane explodes.