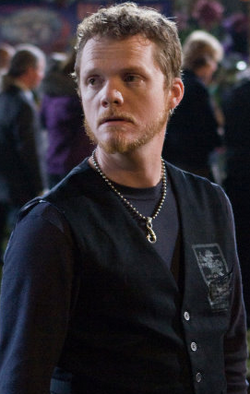 Carter Daniels is a survivor of the McKinley Speedway crash in The Final Destination.

Carter was the second survivor to die.

Carter is likely of Scottish descent, judging by his last name. He was born in Fort Wayne, Indiana, but was currently living in McKinley, Pennsylvania. He is a racist tow truck driver who is married to a woman named Cynthia.

Carter is visiting the McKinley Speedway with his wife when Nick O'Bannon has a premonition of a deadly race car crash. Shortly, before the premonition, a security guard tells Carter to take move his foot out the isle, after he makes a racist remark. When Nick panics and leaves the stadium he accidentally bumps into Carter, who follows him out of the stadium, but tells Cynthia to stay behind. Once outside, he witnesses the accident occur, and attempts to go back for his wife, but security guard George Lanter refuses to let him go back inside, which causes him to resent George.

A couple days later, Carter attends the memorial service being held at the speedway, where he confronts George and blames him for Cynthia's death. He makes several racial slurs and thinly veiled threats before leaving.

Later that night, a drunken Carter goes to George's house in his tow truck to burn a cross on his front lawn. While Carter is setting up the cross, the horseshoe-shaped key-chain hanging around the rear-view mirror of the truck falls and turns on the radio, alarming Carter. A six pack of Hice Pale Ale beer then falls on the gear shift and the truck starts rolling down the hill. Carter rushes to stop the truck, but Death locks the car doors. He fails to notice when a gas canister in the bed of the truck tips over and

leaks on the road. As he shouts at the truck, his pants get caught by the towing cable and he is dragged down the road. The chain strikes the ground and creates a spark which ignites the gas and creates a fire.

George rushes outside after hearing cries for help and finds Carter being dragged down the street on fire. The trail of fire finally reaches the gas tank of the truck and causes it to explode, blowing Carter to pieces, and his severed head lands on George's lawn.