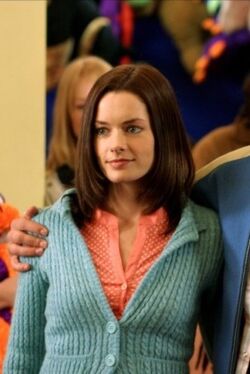 Carrie Dreyer is a character from Final Destination 3. She is the girlfriend of Kevin Fischer and best friend of Wendy Christensen. She is also a casualty of the Devil's Flight roller coaster derailment.

Carrie lived in McKinley, Pennsylvania, and went to McKinley High School. She was in a relationship with Kevin Fischer, and was best friends with Wendy Christensen. Carrie, Kevin and Wendy along with Wendy's boyfriend Jason go to the amusement park to celebrate their senior field trip.

At the carnival she speaks to Wendy, and reveals that she plans on ending her relationship with Kevin after graduation. When she Kevin, Wendy and Jason go to the Devil's Flight roller coaster, Wendy refuses to sit in the back with Wendy, so Kevin flips a coin to decide who will sit in the front with Carrie, and Jason wins.

Before the ride starts, Wendy has a premonition that the roller coaster will crash. When she panics and demands to be let off the ride, a large fight ensues between Kevin and several other students who are forced off as well. Carrie and Jason stay on the ride despite Jason demanding to be let off as well. When Wendy realizes they are still on the ride she is tackled by security and taken back outside. As she walks away, Wendy sees the ride derail as she predicted, and watches in horror as Carrie and Jason fall to their deaths.

Retrieved from "https://finaldestination.fandom.com/wiki/Carrie_Dreyer?oldid=94797"
Community content is available under CC-BY-SA unless otherwise noted.