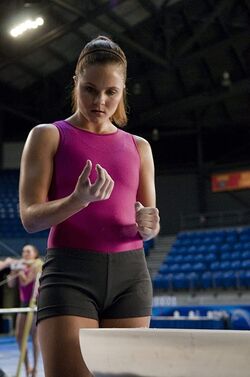 Candice Hooper is a main character in Final Destination 5 and is a survivor of the North Bay Bridge collapse.

Candice was a pretty and athletic girl who lived in New York and was an athlete for her college varsity gymnastics team in addition to being a student. Candice is shown to care a lot about her being a gymnast and she lives a healthy lifestyle. She also worked at Presage Paper, dating Peter Friedkin, and having a rivalry with Olivia Castle.

Candice was on her way to a corporate retreat with her colleagues when Sam Lawton has a premonition that the bridge they're crossing will collapse, killing everyone on it. When he panics, Peter goes to check on him and Candice follows Peter off the bus moments before the bridge collapses as Sam predicted.

After the accident, Candice and the others attended the memorial service for the victims.

The next day she heads to the gym with Peter for the last practice before the championship. At first she doesn't want to go, because she is still shaken up by the bridge collapse, but Peter eventually talks her into it.

While practicing, Candice complains about the heat and urges her coach to fix the air conditioning. When the air conditioning unit is finally fixed it begins to shake, and a screw comes loose and lands on the balance beam. The screw goes unnoticed by Candice who nearly steps on it.

While Candice is practicing on the high beams, Porter practices on the balance beam and steps on the screw. She falls off the beam, knocking over a bowl of powder, which is blown into a fan and temporarily blinds Candice while she is swinging on the high beams. Unable to see, Candice loses her grip and flips mid-air. She eventually lands on the floor, causing her spine to crack and her legs to be folded over her head. Bones and blood spill out of her violently contorted body as Peter, her coach and the other gymnasts watch in horror.