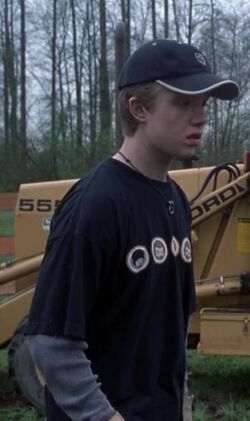 Brian lived in White Plains, New York. He was the son of Peter Gibbons and Mrs. Gibbons who had owned a farm called Gibbons' farm. Brian spent most of his time working in the fields and studying.

Brian was working in the fields when he saw Kat Jennings swerve her SUV out of control and crash. He ran over to help out the others and tried pulling out the log that had her pinned inside, but as he did, it only gave her more pain. Brian was forced to leave and called his father for help. Later, he was nearly run over by a news van, but Rory Peters pulled him back and saved him from death. Rory offered him some advice and Brian thanked him in return.

Around Autumn 2001, after Kimberly and Thomas cheated Death, Brian and his family were at a barbecue with Kimberly, her father, and Thomas. During a conversation, Brian reminded his father of his near-death experience and he told Kimberly and Burke about it. Kim and Burke looked at each other before turning their heads to the grill Brian was standing at. It suddenly exploded and blew Brian's body apart, sending his arm on his screaming mother's plate.