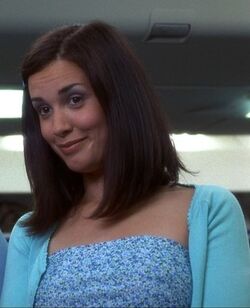 Blake, after Christa asked Alex to move on Flight 180

Blake Dreyer is a character in the film Final Destination. She is a high school student and one of the casualties aboard the doomed Flight 180.

Blake and Christa were almost always seen together and Tod Waggner had a major crush on the two. Both of them got on the plane and politely asked Alex Browning to change seats so they could sit together. After he moved, the plane began to malfunction and exploded, killing Blake.

However, it was a premonition.

Blake and Christa ask Alex to change seats, just like in his dream, but he pants and jumps forward, ignoring the two girls. Alex began to freak and scream that the plane was going to explode, but Blake ignored him and stayed on the plane. Soon thereafter, it did explode, killing Blake and hundreds of other civilians.