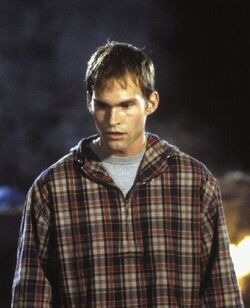 William "Billy" Hitchcock is a main character in Final Destination and a survivor of the Volée Airlines Flight 180 plane crash. He is a senior student at Mt. Abraham High School and was among the students aboard the plane for the school's annual field trip.

Billy is the fourth survivor of Flight 180 to die.

Billy was born on May 14, 1982 in the fictional town of Mt. Abraham, New York and attended Mt. Abraham High School. He is very foolish and clumsy, which causes him to be a main target of Carter Horton's bullying. He is one of the students qualified for the school's annual field trip to Paris. He is of English descent.

While Carter and Terry are walking inside the airport, Carter throws his bag to Billy and he falls. Later, Billy boarded Flight 180. He finds his seat by his ticket and sits down. Billy then eats candy and laughs as the plane takes off, and everyone starts clapping. After Alex has a premonition that plane will crash, Billy is caught in the middle of Alex and Carter's fight and removed from the plane along with the others. Billy tells Mr. Murnau that he was stuck in the bathroom and had nothing to do with the fight, but is ignored. Billy then watches the plane take off as Alex and Carter start fighting and makes a comment about their unlucky position.

Suddenly the plane explodes just as Alex predicted, and Billy watches in horror. He is then soon picked up by his parents. Later, Billy appeared at the the memorial service where he asks Alex a bunch of questions thinking he is a psychic, but Alex ignores him. Days later, Carter nearly hits Billy with his car as he is riding his bike. Billy follows Carter to a coffee shop, where they run into the others, and they all witnessed Terry's abrupt death. That same night, while Billy is riding his bike he sees Ms. Lewton's house explode and Alex fleeing the scene and he tells the FBI agents.

Later, Billy finds Carter at the memorial site, as he is engraving Terry's name into the tombstone, until Clear arrives. They drive in Carter's car and pick up Alex who explains that Death is killing off the survivors one by one.

Realising that he is next on Death's list, Carter stalls his car on the railroad tracks, wanting to die on his own terms. When an oncoming train arrives, Alex, Clear and Billy get out of the car. Carter changes his mind at the last minute, but finds himself trapped inside his car. Alex manages to save him seconds before the train smashes into the car, and Billy began insulting Carter, believing he was still next.

However, as he was still standing next to the railroad, a chain underneath the train swipes up a piece of shrapnel from the car wreckage which is sent flying in Billy's direction. He turns around as the shrapnel decapitates him from the jaw up. After the train passes, his body collapses on the ground.

Billy was mentioned in Final Destination 2, by Officer Thomas Burke, a survivor of the Route 23 pile-up, who says that he was supposed to go to the scene of a robbery with his partner but his chief ordered him to clean-up Billy's remains, and he avoided a shoot-out that took the life of his partner.

Billy's arm is briefly seen in Final Destination 5 as he's being thrown off of Flight 180 moments before it explodes.