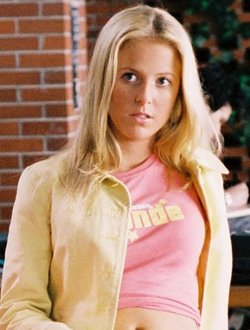 Ashley Freund is a main character and was one of the survivors of the Devil's Flight roller coaster derailment in Final Destination 3.

Ashley was the first survivor of Devil's Flight to die.

Ashley lived in McKinley, Pennsylvania, and attended McKinley High School. She and Ashlyn Halperin were two ditzy best friends, who were very popular among their fellow classmates. But they weren't the stereotypical popular mean girls; they were very kind to everyone. Ashley and Ashlyn cared a lot about each other as shown in the rain scene where when Ashley was giving her phone number to Wendy, Ashlyn covered her head with a notebook instead of covering her own.

Ashley and Ashlyn visit the carnival for their senior class field trip and win a prize in water game. Short later they boarded the Devil's Flight roller coaster together, also they are harassed by Frankie Cheeks, who was recording them. Before the ride starts Wendy Christensen has a premonition that the ride will crash, killing everyone on board. When she panics a fight breaks out between several other students and Ashley and Ashlyn leave in annoyance, shortly before the ride crashes as Wendy predicted, killing the remaining passengers on board.

When Ashley and Ashlyn enter the tanning bed room, Ashley leaves her iced beverage on a table, unaware that the VAC machine controlling the tanning beds is right underneath it. Ashlyn decides to turn up the heater, stating that a few degrees won't hurt. Ashley then decides to look through the CD's on a wooden shelf above one of the tanning beds. While doing so, she accidentally pulls the shelf loose.

Ashley was dancing to the music on her iPod while Ashlyn was falling asleep. Over at the desk where Ashley left her drink, it started to condensate and form a small puddle. As the temperature in the room rises, the iced beverage cup starts to condense and begins to drip onto the VAC machine under it, causing it to malfunction, making the beds warmer. After a few minutes, the girls started to sweat, but only Ashlyn noticed. The air was turned on, and knocked over a coat rack. Ashley took off her earphones. Ashlyn opened up her tanning bed and went to get up as the coat rack hit the shelf, which fit into the opening in the handle for Ashley's bed and the handle for Ashlyn's bed. Ashley banged her head against the lid of the tanning bed,

which was sudden and unexpectedly not opening. The other side of the shelf fit in the now closed lid of Ashlyn's bed, and things started to get toasty.

Ashley started sweating and breathing hard, and her hair was sticking to her head. She was worried that someone was going to have to come in their and help them out. Ashley tried opening her bed again, and burned her hand against the top of the bed. The lights got very bright. Suddenly, Ashley started screaming as she was burning up. She winced panically, struggling to get out of her bed. Ashley tried getting out through the top, but a fan meant to keep the occupant of the bed cool blocked the way. Panicking and burning up, Ashley continued screaming in alarm to get someone's attention. A look of terror on Ashley's face as the glass above her cracks and shatters, which sent thousands of tiny pieces of glass upon her, slicing into her skin. The bottom glass cracked and burst, sending Ashley to the bottom panels, setting her on fire.

While Ashley screams in sheer agony, and shaking violently, the flames melt the flesh everywhere from her body. She looked through the slot but the flames engulfed her. The fire set the entire tanning bed ablaze, with Ashley's blood-curdling scream echoing, as she burnt to a crisp.

In the bonus features of Final Destination 3, viewers get to choose the fate of various characters in the film. If the viewer chooses to change the temperature that Ashlyn decides to set, the tanning bed scene will change to the alternative death. In this scene, the events that start the scene are the exact same up until the point where Ashlyn notices that the temperature is too hot.

In this version Ashlyn decides to get out earlier while Ashley remains in her bed which leads to Ashlyn getting knocked out by the falling shelf (which was knocked off by the coat hanger). The shelf then slides across the gaps in both beds, locking in Ashley while Ashlyn is unconscious on the floor. As the temperature rises, Ashley tries desperately to escape her tanning bed, pounding on the lid to try and free herself, but only to end up burning her hands each time. Desperately Ashley screams out for help but to no avail as Ashlyn is still out cold. At this point Ashley's skin burnt brown and shiny due to the sweat pouring out of her. A look of terror on Ashley's face as the glass above her cracks and shatters, slicing her face and chest, she lets out a loud shriek of pain.

Trying to slide through the end of the bed, Ashley screams for Ashlyn for help. Ashlyn finally starts to wake up to the screams of a terrified Ashley which are getting higher and higher, repeating her cry for help. Ashlyn quickly makes it to her feet and pulls the shelf out of the wedge in the tanning bed and opens the lid to a terrified Ashley, with her arms covering her chest and face to protect herself from the heat. Ashley's entire body burnt to a dark brown and her skin shiny with sweat. Ashlyn looks at her in shock of how burnt she, but Ashley just stares back in relief. Ashlyn extends her hand to lift Ashley up, Ashley grasps her hand in relief. As Ashlyn lift her up the extent of her injuries is clear, her chest covered in shards of glass and cuts from that glass. As she is lifted out of the bed the glass under her shatters, exposing the live wires underneath. In an instant Ashley and Ashlyn are electrocuted, frying her brain, as well as her heart. The shock leaves Ashlyn's body on the floor and a steaming, burnt Ashley still in the tanning bed.