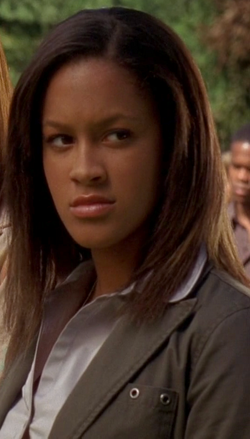 Amber Regan is a young African-American girl in Final Destination 3. She is best friends with Julie Christensen and Perry Malinowski.

Amber lived in McKinley, Pennsylvania and is friends with Julie Christensen and Perry Malinowski. She was a sophomore student. Amber and her friends attended at the amusement park despite being sophomores themselves.

At first, it is suspected that she was the on the ride with Julie. Right after Julie is nearly killed, Amber runs over to help and comfort Julie. Wendy asks her who was sitting with her. Perry looks straight into Amber's eyes before getting up. Perry is then impaled and blood splatters all over her. Amber then runs off, screaming in horror and covered with blood. She did not die as she was not on the rollercoaster.