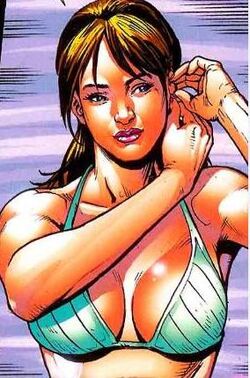 Amanda is a character in the comic Final Destination: Spring Break. She is the girlfriend of Matt and a survivor of the Hotel Grand Tzolk explosion. Amanda, along with her boyfriend Matt and her friends Carly Hagan, Kris, Katie, Bryan, and Jake, decide to leave college for a vacation in Cancún. While they are on board the plane to Mexico, Carly has a dream where she and all of her friends died in a fiery explosion due to a leaking boiler. However, Carly simply thinks it's a dream after her boyfriend Jake wakes her up and they decide to head into the city, where they partied on the beach and streets before departing to their hotel. While there, Carly freaks out and creates a stir that causes all of her friends to leave the hotel. Waiting outside, they all witness the hotel explode, just as she predicted.

The next day, they all go parasailing, only for things to take a turn for the worse. Kris is killed by the motorboat's propeller after the throttle to the boat stuck and swerved out of control into the reef. While at the hospital, Carly noticed the logo she drew on a piece of paper was the exact same one that was on the engine that killed Kris, and she thinks that some force is after them. Amanda is grateful that she is alive, but thinks Carly is merely babbling. Later that evening, Katie dies when she's impaled in the ribs by a display skeleton.

Amanda and the group venture off to another hotel, where they find three more survivors named Dreena, Gino, and Jeremy. All of them band together and take a trip to a set of Mayan ruins before going scuba diving. During the dive, Gino dies when a broken eel statue hits his air tank and his body skyrockets through the glass floor of the boat and he's impaled in the mouth. That night, Sue Flanders arranges for the group to be transported out of the city after she pulled a few strings, but the plan doesn't go well, as a forklift plows into the jet bridge she, Dreena, and Jeremy are on, and the resulting crash kills all three of them, with the group watching. With nowhere to go due to the hurricane, Amanda and her friends stay at a hotel and relax for a while, staying very close to each other.

Amanda is the sixth survivor of the Hotel Grand Tzolk explosion to die.

Thinking she'd be scalded to death, Amanda left the hot tub she and the others were relaxing in and decided to dive into the pool for a swim. As she began to swim, the boiler controlling the hot tub malfunctioned and ignited a small fire. Somehow, the automatic pool cover begins to close before Amanda has time to resurface. Although she desperately calls for help and tries to escape, she is unable to swim over to the ladder to climb out the pool, and subsequently drowns.

Retrieved from "https://finaldestination.fandom.com/wiki/Amanda?oldid=85460"
Community content is available under CC-BY-SA unless otherwise noted.