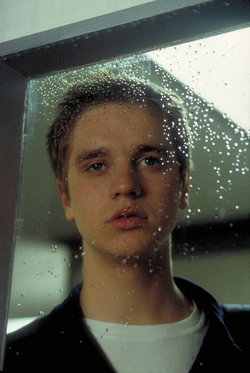 Alexander Theodore "Alex" Browning is the protagonist of Final Destination, and the visionary of the Flight 180 explosion.

Alex was the sixth survivor of Flight 180 to die.

Alex was born on September 25, 1982 in the fictional town of Mt. Abraham, New York to Ken and Barbara Browning. He has been friends with siblings Tod and George Waggner since childhood, and has been their classmate since then. He studied at Mt. Abraham High School, and was the rival of Carter Horton, who frequently fought with Alex whenever they were together. Alex was one of the students qualified for the school's annual field trip to Paris, France.

Alex boards Volée Airlines Flight 180, with his classmates and teachers for their senior class field trip to Paris. Before take off, Alex has a vision that the plane will explode in mid-air, killing everyone on board. After the events from his vision begin to repeat themselves in reality, Alex panics and attempts to stop the Flight, however, his warning is ignored. Carter believes Alex is making the whole thing up as a joke, and attacks him, which leads to seven passengers being removed from the plane.

While waiting at the airport, Alex witnesses the plane explode as he predicted. He is later interrogated by FBI Agent Schreck and Agent Weine, who believe that Alex is responsible for the plane explosion. While attending a memorial service for the victims, Alex develops a relationship with fellow survivor Clear Rivers.

After the service, Tod is killed in an apparent suicide, although Alex doesn't believe that Tod killed himself. With Clear's help, Alex breaks into the funeral home, to see Tod's body, and encounter's mortician William Bludworth, who is more knowledgeable about Death than anyone else. Bludworth tells them that they have ruined Death's plan and warns them that Death is now taking the lives of those who were meant to die on the plane. The next day, Alex and Clear discuss what the mortician said at a cafe, where they encounter the rest of the survivors, and witness Terry Chaney's death. Later that night, Alex realises the survivors are dying in the order they were meant to die on the plane, and deduces that Ms. Lewton is next. He rushes to save her, but thinking that Alex is up to no good, Ms. Lewton calls the FBI agents who take him in for questioning. Although Alex fails to convince the agents of what is going on, they decided to let him go. Nonetheless he is too late to save Ms. Lewton.

The remaining survivors reunite and Alex explains what's going on as they drive through town. When Carter learns that he is next on Death's list, he parks his car on railroad tracks, wanting to die on his own terms. He changes his mind at the last minute but can't exit the car. Alex manages to save Carter just before his car is smashed by an oncoming train, butBilly Hitchcock is killed shortly after by flying shrapnel from the wreckage.

Alex concludes that since he intervened Death skipped Carter, meaning he is next on Death's list. While hiding out in a fortified cabin Alex remembers that he changed seats with two girls Christa Marsh and Blake Dreyer in his premonition, meaning Clear is actually next, and he rushes to save her while being chased by agents. Along the way Death attempts to slow Alex down, but can't kill him since its not his turn to die. He arrives in time to save Clear who is trapped in a car with a leaking gas tank, and surrounded by loose live wires, and grabs the wire, allowing Clear to escape from the car seconds before it explodes, leaving Alex incapacitated.

Six months later, Alex visits Paris with Clear and Carter to celebrate their survival. However, after explaining that Death never skipped him, Alex begins to see more omens, and leaves the table. A chain reaction causes him to nearly be hit by a falling neon sign, but Carter saves Alex at the last second, and Death skips him. When Carter asks whose next on Death's list the sign suddenly swings back down towards Carter, meaning that Death's plan is still in action.

A news article in Final Destination 2 reveals that Alex didn't leave his house for months after the events of the first film. It also reveals that Alex was bludgeoned to death by a falling brick, while standing in an alley. Alex's body was found next to a horrified Clear, and a local merchant called the police after hearing her screams.

In Final Destination 2, Kimberly Corman, the visionary of the Route 23 pile-up, visits Clear at the Whitehurst Mental Institution. During an argument Clear reveals that she blamed herself for Alex's lost, and shows Kimberly a picture of Alex's body lying face down in a small pool of blood. She later mentions that she and Alex cheated Death "dozens of times" after the first film, meaning Death went back and forth between the two of them before finally getting Alex.

In Final Destination 3, Alex was mentioned by Kevin Fischer, a survivor of the Devil's Flight Roller coaster derailment, while he explains to Wendy Christensen about the explosion of Flight 180 and the deaths of the survivors of the plane.

In Final Destination 5, Alex and the rest of the survivors are seen being thrown off of Flight 180, moments before its destruction.

Little did he know he was directly across the isle from Sam Lawton who also had experienced Death-related premonitions of his own just a couple of weeks earlier. Momentarily noticing Sam, he reached his hand over to him as he shouted across for him to 'get off the plane'; Sam was visibly shaken by this but remained on the plane, only realising what Alex was trying to warn them about after it was too late to escape.